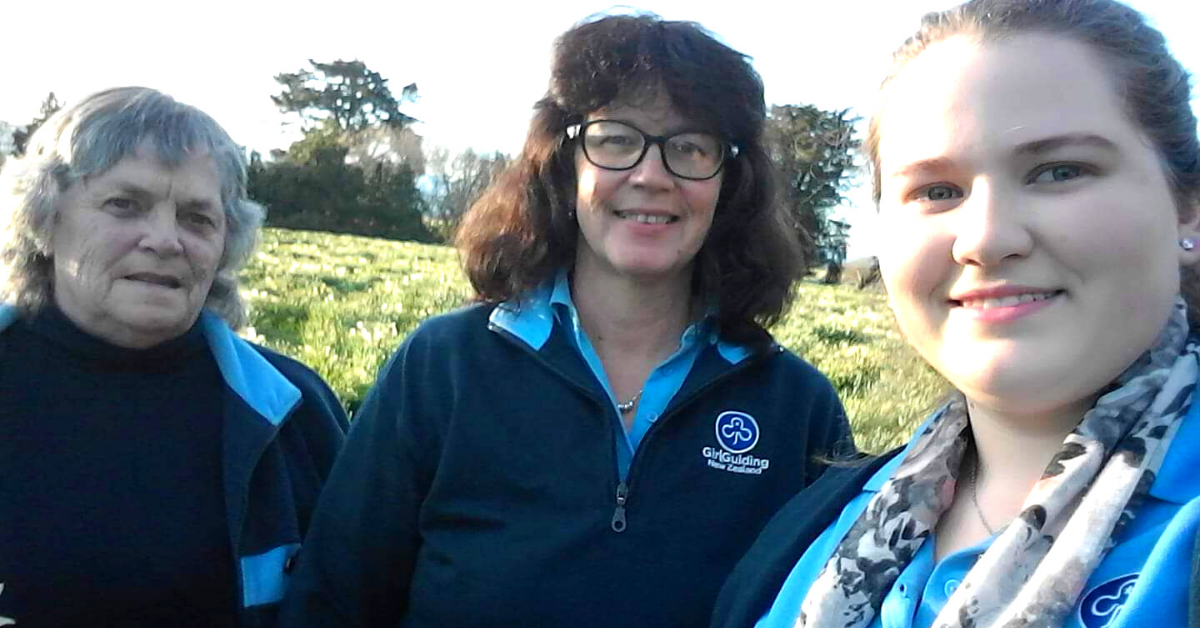 This family is from Carterton and collectively runs the GirlGuiding NZ units there. Dale (left) is the mother of Debbie (middle) and the grandmother of Jessie (right). They were all raised and still live in Carterton, a small town in the beautiful Wairarapa.

So how did this family get involved in GirlGuiding New Zealand? For Dale (a mother and grandmother), it began in this family in 1978. “Upon losing a son, I was looking for something to fill a hole in my life. On the steps of my church one morning, someone suggested that I took on leading a Brownie pack. I laughed but eventually agreed! When I was later asked to become a Guide leader, I asked Debbie if she minded me being her Guide leader, but she said she didn’t mind, and from there I went on to become a camp advisor, a district commissioner, a division commissioner, then assistant provincial commissioner, then I came back full circle and became a Pippin leader.”

Debbie was 11 years old when mum Dale started as a Brownie leader, so she went straight into Guides. “I got the top badge (the Chief Commissioners badge) then went on to be a Ranger, got my Queen’s Guide, became a Guide leader, then a Ranger leader, then a Ranger Advisor. I stopped for a short while when I had my first child but went straight back to being a Pippin leader and have been ever since.’

“I was quite literally born into it,” says daughter and granddaughter Jessie. “I started Pippins at 5 years old and have gone right through to my top badge. Skipping Rangers, I went straight into being a unit helper until I was old enough to be both a Brownie and Pippins leader.”

Dale recollects, “Being involved in Guiding is an incredible life. I was a Guide for a year when I was 11 but when I started leading, it brought Debbie and then Jessie all together, making us really close. I’ve made so many lifelong friends in my 40+ years of Guiding and had many life experiences that gave me skills and experiences I never would have had otherwise. It has consumed my life in the best way possible,” she adds.

Debbie agrees with mum, “Guiding became who I was. It was my life, and I was never into sports, so even weekends were spent camping and hiking. I tell my children about things that I did when I was a Ranger, biking around the Wairarapa, no adult supervision, the hikes we went on, and they couldn’t believe it! Once I had my kids, they came to everything – camps, sleepovers, and hanging out with other community kids.”

Jessie tells us that “Mum was my Pippin leader from the start. When I got to Brownies, I had a different leader, and then when I went into Guides, Mum was my leader yet again. I then got all my leadership qualifications, most recently my indoor camping qualification. I have run one camp so far and am a Brownie leader alongside my old Brownie leader.”

“We are lucky in Carterton that we don’t really need to advertise at all, we have a ‘bring a friend’ night and that’s all we need to do,” says Debbie. “People in the town know about us and the girls just keep coming. It’s the community that shows up for Guiding and we have heaps of fun.”

Dale reveals: “All three of us and one other leader make up Guiding in Carterton. If someone else came and wanted to be a leader I would happily step down but for now, I get involved.”

Debbie adds, “Dale has threatened to leave before but she plays a valuable part for girls in Guiding in Carterton, so we don’t want her to!”

Jessie agrees, “The girls still enjoy having her there, there are a few Brownies that ask about her and ask if she is going to come to events and meets.”

GirlGuiding New Zealand has provided these 3 special women with some amazing stories. Dale remembers when she was the Site Co-ordinator for 2000 Jamboree it was lots and lots of work. “This was the year everyone thought the world was going to end and people were preparing for the end of the world. I will never forget this trip; for the opening ceremony, we arrived on Harley-Davidsons!”

Debbie recalls, “When I was a Ranger, I was doing lots of badges and activities with my best friends. One of our tramps took two days crossing land we had never been to before. There were lots of weather problems and we carried super heavy backpacks without GPS or cell phones, so our map-reading skills came in handy for that trip.”

Jessie also happily remembers her Jamboree in 2012. “Meeting new people, and doing all the activities was amazing, especially the jet boat riding. I definitely wouldn’t be able to do that with mum because she doesn’t like boats. Just because we weren’t together, I had that chance! I did learn to be more independent on that trip as I had completely new people around me, so I made many new friends.”

Dale says with huge pride, “It has been great to watch Debbie and Jessie take charge and lead; I am just astounded. For me to be able to step back and let them do wonderful things in Guiding, it is nice to be there for that.”

“I love the way that we do this together” says Debbie, “and I want this to keep going as long as possible. It’s great watching Jessie blossom and work with her while this happens.”

Jessie can see herself being a Brownie leader for a while and keep going with what the three of them are doing. “There are no plans to change because what we do just works!”

The three of them have their own special message for all current girls in GirlGuiding New Zealand:

Dale: “It is a wonderful life. Guiding teaches you life experiences, basic skills and provides a way of learning without knowing that you are learning. Girls can do anything, and boys can’t!”

Debbie: “Go for it. Give it all a go, enjoy it, have fun with your friends.”

Jessie: “Take every opportunity given and do anything you can. Go to camps and jamborees, take what’s available and be a part of it.”

These women have been inspirational to hundreds of girls in the Wairarapa region. GirlGuiding NZ would like to acknowledge the unresolved dedication and time they have given to Guiding and the community of Carterton.