Close
> Blog > Girls > I have a voice! Eve Hagenson’s story 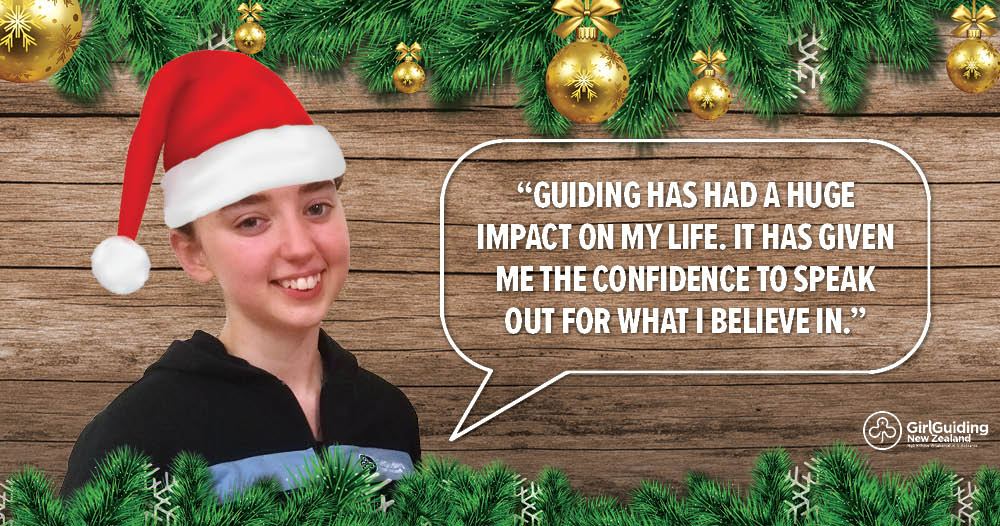 I have a voice! Eve Hagenson’s story

In 2015, Eve Hagenson arrived in New Zealand from Ireland where she had been involved in Guiding. She decided the best way to get involved in her new community was to join the local Guide unit in New Plymouth. Now Eve is a Queen’s Guide Recipient and is giving back to Guiding as a volunteer leader – inspiring the next generation of girls.

Eve says, “Guiding helped with my transition from Ireland to New Zealand as it was so easy. Unlike school, everyone was so welcoming and accepting and I was able to settle in very quickly.

However, after moving up to Rangers, Eve found out that the constant pain she was
experiencing in her jaw, was a form of juvenile arthritis. Her official diagnosis – Juvenile Idiopathic Arthritis (JIA) – a type of autoimmune disease.

“At first, when I was diagnosed, I was in extreme shock”, says Eve. “Then I started to think about how it would affect everything I did. I was involved in a lot of extracurricular activities like swimming and dancing which unfortunately I had to give up, but quitting Guiding was never an option. I had seen the older girls get their Queen’s Guide Award, the highest award you can work towards in guiding, and they were such an inspiration. This made me determined to get mine too, so I just told myself – I can do this – I just need to adapt.”

Eve did adapt and very quickly. Although the pain was sometimes so excruciating that at times, she was unable to get involved in discussions with her Ranger unit, she was steadfast about finding her voice.

The new medication she was on was causing her to feel sick and at times she found it difficult to focus or was extremely tired, but that didn’t stop Eve from attending her unit meetings and camps. “One-weekend camp that really stood out for me was doing the Outdoors Certificate in Whanganui”, Eve says. “I had just started on the meds on Friday, and I felt – well, just yucky. Through the pain, I did the best I could, and the leaders were very caring and supportive. They even slightly adapted the activities to make sure I was able to fully participate.”

The Queen’s Guide Award gives girls a chance to develop their skills, whilst contributing
to guiding and your local community at an impressive level. Eve says, “I attempted to focus on providing support to disadvantaged groups, especially women and disabled
children as I deeply associated being a young woman with an invisible disability.” She
learned the importance of giving back to the community and has been grateful of the opportunities where she has learned more about advocacy and actively developing her
people, organisation, and communications skills.

From dealing with arthritis in her jaw where speaking was painful,
Eve has undoubtedly found her voice!

Eve is the Deputy Head Girl at her school and was part of a team who were the National
Winners of the 123Tech Challenge in 2018 with their creation of a smart box that helps
remind people to take their medication. She is a Friends of Ireland Youth Council Member and participated in GirlBoss Edge, a 10-day leadership accelerator programme for high school aged young women. She has been a leader at Arthritis NZ’s children’s camp speaking to kids and parents of children who have (or just been diagnosed with) JIA and she has also competed in the ‘oratory’ section of the O’Shea Shield, a competition between the Catholic High Schools in the Palmerston North and Wellington Dioceses.

Guiding has also helped Eve on her career pathway as she plans to go to university next year to study law and fulfil her dream of becoming a human rights lawyer, so she can fight for those without a voice or a platform of their own.

“Guiding has had such an impact on my life”, says Eve. “I have definitely become more confident. Some of the activities we had opened my eyes and I am more aware of the big issues that girls are facing, not only in New Zealand, but around the world.”

“The last badge I did at Rangers was the Oi Period badge. When it was launched, I talked to my leader and said I really want to end Guiding by doing this badge. It was so interesting and informative, especially on the inequality to access period products and how period poverty affects so many girls and young women around the world. This
really reiterated that the career path I was taking was the right one,” says Eve.

As a Ranger, Eve has had many memorable experiences such as Flight in 2018, helping with the younger girls and recently leading at the National Discovery ‘ExtrEAM’ in Taranaki. Through these experiences she has made many friends, grown to be a patient and compassionate leader, and developed an appreciation of how great an organisation GirlGuiding is.

“I have always managed to achieve my goals and strive to reach my full potential. Everything Ido is with perseverance, and I will not give up until I am satisfied with the result of my efforts.”

While waiting to start university, Eve is a currently a Leader at Merrilands Brownies and assists at the 4th Kokowi Ranger unit. Local Co-ordinator and Ranger Leader, Maria Grond says, “Eve has so much confidence, is very responsible, sensible and is such an inspiration to the girls. She supported me in helping change the culture of an unmotivated Ranger unit into a thriving, focussed group of young women who are now wanting to realise their potential. She is just a wonderful young woman and I look forward to seeing what she achieves in life.”

Please DONATE today to help give girls like Eve, find their voice.

It is young women like Eve who can show resilience in times of adversity that your donation will support. Even through her health challenges and a global pandemic, she has never been discouraged. “Guiding has helped me have such a positive attitude and I feel I am able to adapt to whatever challenges come my way. Nothing can hold
me back and I am determined to make my voice count.”

Guiding Under the Covid Protection Framework

We want everyone to have a safe and fun time while Guiding. That’s why everyone who is eligible will need…

Ruby has been a part of Guiding for six years. In her volunteer role with us, she has worked with…